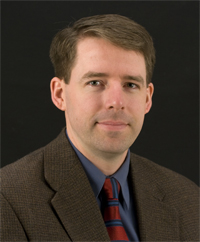 In January 2010, Joshua Campbell was appointed vice president of marketing and sales of Campbell Scientific, Inc. In this position, Joshua will be the corporate officer primarily responsible for customer relations, marketing communications, sales, application engineering, and support. Joshua has served on the board of directors since 2002 and was the manager of the Domestic Sales group from 2008 to 2010. He began his affiliation with Campbell Scientific in 1997, working part time while attending Utah State University.

From a young age, Joshua has had a keen interest in the company. While earning a master’s degree in business administration, Joshua’s complementary work efforts were focused on helping manage the construction and paying subcontractors for Campbell Scientific’s 43,000-square-foot manufacturing facility, completed in 2000. After completing the coursework for an advanced degree in biometeorology, he became a full-time technical sales representative for Campbell Scientific.

A key learning experience came shortly after Joshua started, when he turned down a sale of several hundred thousand dollars worth of equipment because it became obvious to him that the customer would be better served with an alternative solution. It was then that the corporate philosophy that, "Our customers must be better off with our products and services than they were with their money," came into focus. "We must recognize that the long-term relationship that develops between customers and sales-and-support staff is based upon this principle being honored," says Joshua. That understanding helped Joshua as he established many key customers in his assigned sales territory, northeastern USA. Among his notable projects are an oyster-research facility at the University of Maryland and a meteorology network at the US Army Aberdeen Proving Ground, both requiring extensive configuration of measurement-and-control systems.

Joshua became a member of the American Meteorological Society (AMS), and in 2005, Bert Tanner, the previous vice president of marketing, encouraged Joshua to finish the thesis for his master’s degree. Joshua took a leave of absence from work and focused his efforts on the completion of his thesis. Under the supervision of Dr. Robert R. Gillies, Joshua was able to complete his thesis, A comparative simulation of net ecosystem exchange (NEE) CO2 fluxes for two stomatal-resistance formulations over corn and soybean canopies, and received his masters in biometeorology from Utah State University.

In 2008, Joshua was promoted to manager over the Domestic Sales group. Under his leadership, the group was expanded to a team of six, with individual territorial assignments within the USA. As vice president of marketing and sales, Joshua’s top priority is to continue to develop the capabilities of Campbell Scientific’s technical sales and support team while maintaining the high level of market expertise and service that customers have become accustomed to over the past 35 years. Says Joshua, "The company’s success in meeting customer expectations has been largely dependent on individual expertise and performance. We hope to continue this time-honored tradition of specialized support and serve our customers even more effectively as we continue to grow."